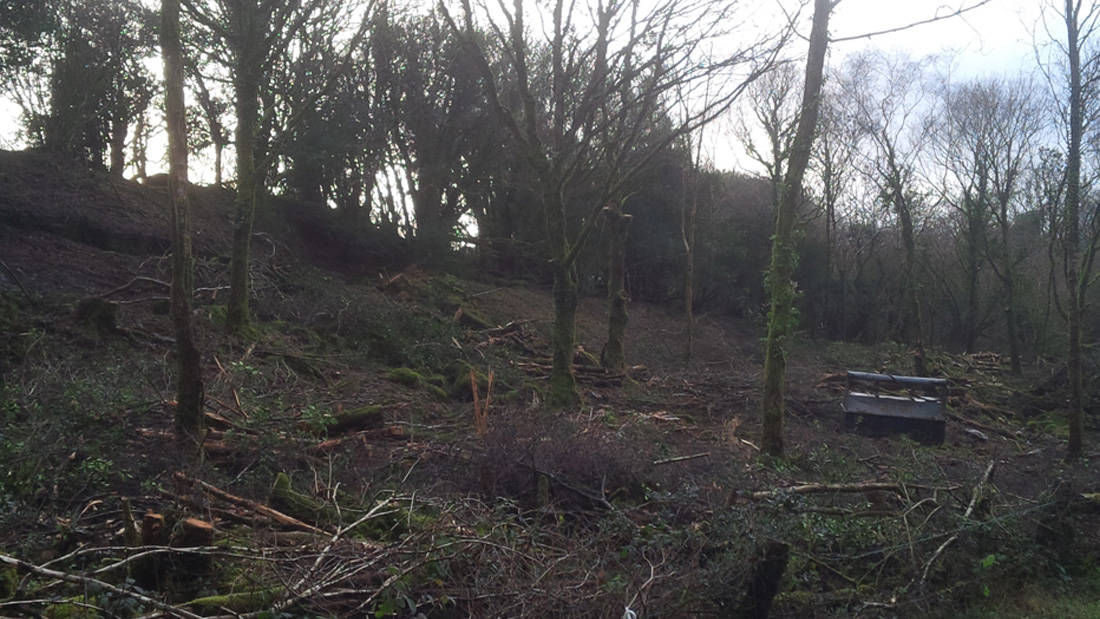 Posted at 17:26h in Latest News by Sean McGinnis

In response to the enormous amount of interest regarding the recent forestry operations in Silvergrove, Kilbarry, Co. Cork, (loosely referred to as Toon Wood) I’m delighted to take this opportunity to answer some of the genuine concerns raised, and to give some background and explanation of what we are trying to achieve there.

The land owner at Silvergrove is a woman with a keen interest in both history and the environment. She approached Ecoplan Forestry in 2014 wondering if she could somehow combine her poor agricultural land and scrub woodland into the ancient, traditional land management practice of ‘wood pasture’, the mutually beneficial integration of trees, forages and livestock.

‘Wood Pasture’ or Silvopasture is an enlightened land management technique. It is currently being promoted by the Forest Service as Agro-forestry due to it’s enormous benefits, and is grant-aided at the establishment stage. Please see the sites: Silvopasture and agroforestry.  I was extremely interested in the project. It was a tradition in the area, and it would have a range of benefits both economic and environmental.

My initial site visit showed a farm that had fallen into disrepair over the years. Neither farmland nor woodland; furze, bracken and willow were encroaching onto the open fields throughout. The existing trees were predominantly clusters of coppiced ash, birch and willow, with individual oak and holly in places. The tree stocking was varied, but generally extremely low, and thicker on the boundaries. Ash was regenerating naturally, along with pockets of the other species in places. I estimated the 13Ha was 50% open fields, 50% scrub woodland.

I applied for a General Felling Licence (GFL) in May 2015. The site was in the 3km NPWS referral zone, and the local Forest Service (FS) Inspector is their Native Woodland expert, so I was confident that the application would be assessed by expert professionals who were well able to assess any potential issues.

3 months later FS responded with a query – ‘whether or not this is a thinning or a clearfell application and if it’s a clearfell application, a replanting plan must be submitted’. I responded with the details as requested, and volunteered the objectives and prescribed operations. The GFL was approved and issued in late 2015. Considering the length of time it took I can only assume it was referred to the NPWS, and assessed in detail by the FS.

Once we received the felling approval we waited. The area is sensitive, and there were issues with some locals, so we waited to hear anything from anyone interested. We heard nothing. We also waited to properly plan, and to choose experienced contractors with the right machines that wouldn’t damage the ground. Finding a contractor was difficult considering the very small volumes of timber, and its small value, that would be felled.

During this waiting period the regenerating ash on site was found to have Chalara (ash dieback). And importantly, a Department of Agriculture Inspector advised the land owner to remove the scrub.

In 2017 we applied for an extension to the Licence. We were happy to go through the entire application process again – referral to NPWS, site visit by FS, clearly visible sign and public notice at entrance. We received a second GFL approval in April 2017. The approval was a standard approval for 5 years. As before, the GFL had absolutely no conditions attached.

Felling began in early September 2017, 2 years after felling was approved. A Felling Notice was erected at the gate giving all details and contact numbers, which has remained in place during all operations.

On the 13/10/17 the site was visited by the local Forest Service Inspector (the native woodland expert). He was responding to complaints made by a member of the public. (The land owner suspected a local begrudger) He found no relevant issues, said he was happy with the work, and to continue. ‘(The Inspector) said he was satisfied that there was no particular breach of the Licence’.

FS issued a letter following the visit with details of the Native Woodland Conservation Scheme, which had been discussed on site. The letter also mentioned grazing which was beyond their brief, and not relevant to the operations.

At the end of October the site was hit badly by storms Ophelia and Brian, as had much of the south-west. Unfortunately a large number of senescent oak were blown, along with many more younger trees. I assessed the damage, documented it, and decided the damage was a result of catastrophic rather than endemic windblow. So our objectives did not change.

In early 2018 the site was again hit by the ‘Beast from the East’ causing more significant damage which was again documented and assessed.

On the 14/09/18 the local Inspector and another Inspector visited the site again following another complaint. He threatened the workers and the land owner with legal action, stopped all the work, and suspended the Licence. In his Statement of Evidence the Inspector noted ‘We identified 12 oak trees, one beech and 7 ash.’ 20 trees  after 3 bad storms over 13Ha.

On the 30/10/18 the suspension was lifted following analysis by the Manager of the FS Felling Section. No breach of the Licence was found, the suspension was wrong, as the complaints were unfounded. Again, we were advised to carry on doing what we were doing.

It’s important to note that even at this stage I had heard absolutely nothing from anyone regarding the work we were doing. Despite my sign on the gate, and the notice, anonymous complaints were made, accusations were hurled, but no-one asked for any information or dialogue.

In early November, in an attempt to pre-empt any future issues, we requested a meeting on site with the head of FS Felling Section and anyone else they chose to bring. We wanted the opportunity to openly discuss what we were doing, and to invite any feedback or concerns. FS did not meet us!

On Monday the 07/01/19 I received 4 calls from an unknown number, and I also received 2 e-mail enquiries about the work at Silvergrove. I was delighted to finally receive some interest. I answered the calls, answered the e-mails, no problem. The next day I got a call from FS. Apparently there were more complaints.

There were also threads on Linked-in and Twitter with a lot of anger and genuine concerns. There was also a lot of misinformation.

I appreciate everyone’s concerns here. I only regret that I haven’t heard from anyone before now in the 3 years this has been going on. Everyone is entitled to their opinion, and to form their own conclusions, but Foresters (private and public), Dept of Fisheries staff, NPWS staff and Dept of Agriculture staff all approved the work. As environmental professionals we are dedicated to protecting and enhancing our environment, do you really believe this was a conspiracy to destroy an ancient Forest?!?!

All of the above is the truth as it happened, documented in letters, e-mails, texts and pictures. If you’re still dissatisfied then maybe the system let you down. If the system doesn’t work then maybe all that anger should be directed at the system? The land owner did everything by the book. She’s trying something new, something different, and change & the unknown can be frightening. I’m always available to answer your questions, maybe allay some fears, and shed some light. Let’s talk.